I went back and read my very first blog entry that my friend Daniella encouraged me to write and still can’t quite believe how far I’ve come in such a short time. I don’t check the stats too often so I got a slight shock when I looked at them yesterday. This blog and my facebook page has had over 8,000 views in nearly 20 countries and I figure since I don’t have that many family members, a large percentage of these are people I have probably never met before! What staggers me more is that I never thought anyone would actually be interested in my little musings which I wrote more for myself than anyone else to capture my experiences for posterity.

So 1 year on, what have I managed to learn?

It hasn’t all been peachy… There have been some downsides too. I’ve picked up a very sore right thumb and probably the beginnings of carpal tunnel in my right wrist which will only probably get worse! Endless hours kneading fondant or gumpaste will do that to you.

The lead up to Finals Week at culinary school were very much focused on advanced decorating techniques and tons of projects. We covered nearly every technique under the sun but although I was learning so much I still felt like I could do with another 3 months here.

So project-wise, here are a few of my favourites… 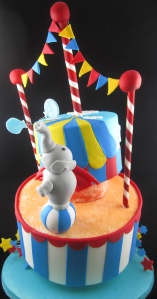 A Circus Topsy Turvy Cake which took 2 days to create. The poles were airbrushed red after taping and the elephant was made out of rice krispie treats! each stripe and semi-circle was painstakingly measured and cut to size and individually pasted on. 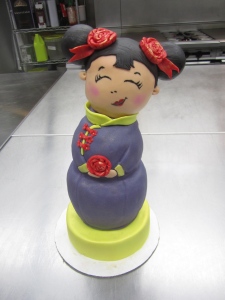 A very cute Russian Doll carved cake which I modified into a China Doll by adding on a head made of rice krispie treats (so it didn’t collapse) with cute knots for hair and a hand painted face. This cake was made from lemon ginger pound cake and buttercream and took around 6 hours  to create.

My absolute favourite has to be this carved Kate Spade handbag which was by far the most challenging.

The hardware was made from gumpaste and wired for support. Whilst the shape was relatively simple, I couldn’t believe I managed to pull the painting of the pretty intense design off.

One of the biggest projects of the course was a wedding dress cake which brought a whole new set of challenges where I had to make a flower I had never attempted before and is notoriously delicate (both in sugar form and in real life!). After a 20min crash course and intense practice overnight, I managed to pull this off.. 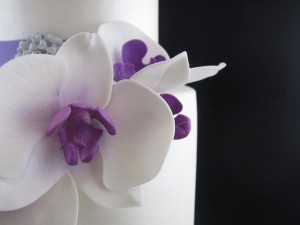 Inspired by the purple colour theme and flowers from my own wedding I chose ombre ruffles and graduated bands to give the cake more dimension. The silver brooches were also made from silicon moulds I created in class to match the bracelet I wore for my wedding out of gumpaste and painted silver lustre.

The diagonal spray was also loosely based on the strap on my wedding dress bodice and you can also see the centre part of my bracelet which inspired the brooches above. I chose to make purple centres for the orchid for better consistency of colour. Pleased to say that 3 days of slaving over this cake has been preserved as it is now on display in the reception of the French Culinary Institute as it was a 100% dummy cake.

We were also taught how to create a whimsical cake where the theme was “grooms cake” (translation: no girly cakes!). So my teammate and I went for Beer Mug and a bowl of nuts and pretzels instead! We didn’t quite finish this one as it was supposed to have a beer can sticking out of the top to look like beer was being poured from above the glass but it still looks really fun. 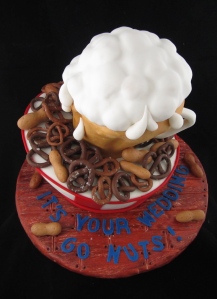 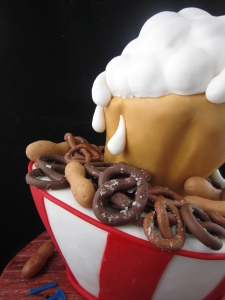 My final cake took me some time to design – mainly because the theme was so wide (“My Dream Wedding”) and I had already designed a cake based on my dream wedding dress. I decided to use my chinese wedding dress which was made by Malaysian designer Zang Toi as inspiration for a few reasons. I loved the colour and the simplicity of the original dress and the beautiful lace details. I also wanted to pay homage to my Chinese heritage and make a cake that wasn’t just a white wedding cake. 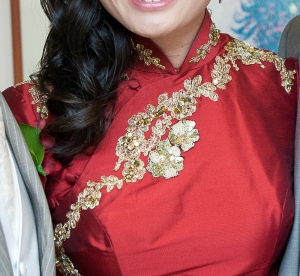 The bodice was represented on the second tier with lace brush embroidery painted in gold after the icing had dried.

Colour isn’t something a lot of brides would generally order so this was a chance for me to indulge in something bold and totally luxurious. I made the design a little bolder than the original lace for higher impact with bigger flowers and a more organic look 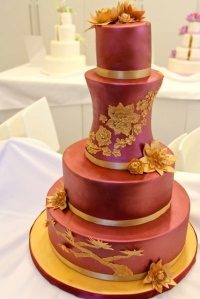 I chose a deeper burgundy than the original dress to avoid a christmas-like look, golden lotus flowers which took so much time to dry due to the humidity of summer in New York and I also added a Chinese-sylte willow tree on the bottom tier. The trunk of the tree is brush embroidered as well.

Some people have asked me why the top tier looks a little wobbly – this was because of a very soft praline mousseline filling that buckled the top tier after being cut. The judges who graded our cakes had to also grade them on taste so a slice was cut out of the back of each cake for tasting. Here is a peek behind the scenes at the back of the cake:

We then served portions to our family and friends who attended our graduation so more chunks came out! 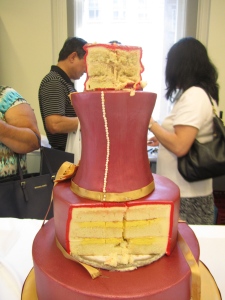 Closing Time…
I thought instead of blogging about the lead up to finals I would just share this video which was a slideshow I made for graduation about the journey I’ve been on with my classmates. Enjoy!

As part of our finals week, we were asked to complete a business portfolio assignment which really forced us to think about my longer term aspirations in the cake world and what we want to achieve in the next few years. My business consulting background has really started to kick in here with numerous wild ideas tempered by business-minded realism that may some day turn into reality.

What I’ve learned about myself is that my one true passion is having an impact on others. Whether it is seeing someone’s demeanour change at the sight of a sugary work of art I created or a friend push themselves out of their comfort zone after encouraging them to go that one step further, I love changing someone’s mood or thought pattern even if only for a few fleeting moments. Even in my day job, I love coaching others and helping them to improve their skills or even just think about something a little differently.

So my ultimate ambition?

I’d love to teach and one day mentor people the same way I have been mentored and taught. That is a much tougher goal than you’d think because in the world of cakes, you need to be an absolute master before you can instruct. There is no halfway point. There is no concept of “those who can’t do teach” – and teaching cakes is a whole new level of hard. Here is where I give my biggest vote of thanks to my wonderful Chef Instructor Judy Lai (www.silkcakes.com) who not only runs her own cake business but was hands down the most phenomenal teacher I’ve ever had. Her affable personal style, goofy sense of humour and innate sense of professionalism really made her outshine every other teacher I’ve had and I absolutely loved the time I got to spend with this pocket rocket of a teacher absorbing her knowledge and being encouraged to push myself that one step further.

Here’s a pic from graduation that I love of two of my best role models – mum to the left and Chef J to the right! (they were sharing tips about chinese cooking I believe..)

With that inspiration in mind I return to Sydney next week with a longer term goal I will slowly chip away at with more practice, more cakes, more challenges and hopefully some new opportunities with some of Sydney’s best cake designers. 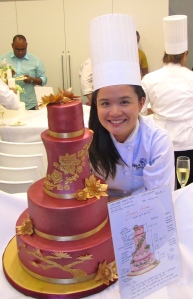 Armed with more knowledge, more confidence and more connections, I hope to bring you more cool creations and thank you for again making it to the end of another lengthy post!