So I finished my final Cake Decorating class at TAFE last Saturday and boy has it been an epic couple of months! To sum up the experience in a sentence: tiring but rewarding, at times frustrating, other times manic but overall fantastic. Quite a few people have asked me to write about my experiences in the class so I thought I’d recount some of my cake ventures for you.

On Day 1, imagine my excitement when these were the first things I saw when I walked into class: 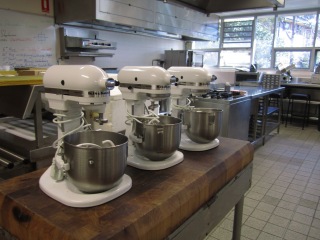 After I introduced myself as a beginner cake decorator who was doing something totally different to her day job, the teacher of the class, Lynn, had me pegged as “the corporate girl”. I still remember her shouting out that I would never make any money and be able to leave my day job if I didn’t pipe my buttercream stars faster… Scary but true!!

This is Lynn doing her thing and the kitchen we worked in: 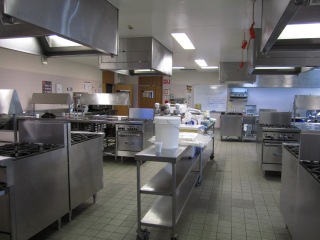 So to commemorate a 2 month long journey I thought I would try and represent my TAFE experience through some selected photos. Our first class was a teddy bear shaped vanilla sponge we baked from scratch and covered with buttercream icing (yum!):

Note the numerous baking paper piping bags in the background – Lynn drilled us on making these during Day 1 – I made nearly 20 in the first class! The first time I made these little bags it was like crazy origami and now I can do them in my sleep!! And they are a huge money saver.. a bit tougher to use than plastic piping bags but a great skill to have in times of piping need!

The first class is still the one I remember the most vividly even though it was over 2 months ago… it felt like I was in Masterchef, frantically mixing different colours of royal icing and madly piping buttercream stars onto my Teddy Bear cake for 1.5 hours working against the clock, frequently looking at my neighbouring students to check my progress and wondering how their stars were so much neater than mine!

This is the finished bear…(my brother says it looks like he’s having a smoke, I prefer to think of it as a purple tongue sticking out in a cheeky fashion as it was intended!) 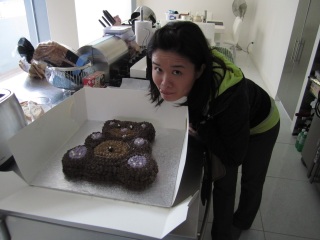 I also remember getting hugely frustrated with the first time I had to use No.1 piping tip. For those not in the know, a 1 tip is a piping tip size larger than the professional tips used for piping very very fine lines… One sugar crystal and your perfectly beautiful straight line of icing becomes a noodly mess and extremely frustrating to use. That’s when you find out if you were born to pipe or not. The diligent pipers will get their little cocktail stick, scrape away the sugar crystal and keep persevering… The less diligent ones will either a) give up or b) throw the whole thing out and try to start again. I’m glad to say don’t do either and I still love to pipe.

A couple of classes later we covered Brush Embroidery… a really beautiful technique for creating fantastic vintage looks.. One of my favourite classes cos it was truly a artistic experience with no real time pressure and total freedom to create something from our imaginations. This is the piece I started in class: 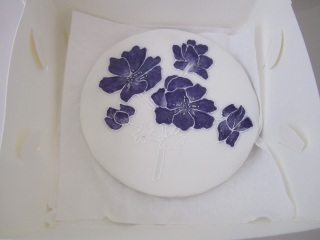 In one of our later classes we learned how to use pastillage which is a really hard drying form of sugar intended to build 3D structures you’re not meant to be able to eat (well you could .. but it would crack your teeth). It dries super fast to a texture similar to fine china and is basically impossible to work with unless you are extremely prepared and have all your templates ready. We used this to build simple chocolate gift boxes during class: 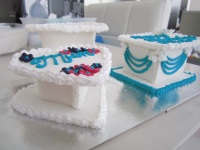 The pieces were a bit of a rush job but hey, for my first pastillage attempt I wasn’t too displeased with them! We were also only mean to make 2 heart shaped boxes but I got adventurous and decided to try and assemble my own rectangular box without any templates…. living life on the cake edge!!!

Anyway, in our final class we learned how to do some basic sugar flowers and covering fruit cakes with marzipan and sugarpaste. I was really bummed that I missed out of most of the sugar flower component cos I had to leave early to get to a wedding… in the end I only managed to get some basic frangipanis done and cover this cake which in itself was a trial as the sugarpaste was so soft from the humidity it was a total nightmare to work with:

I’m saving this fruit cake for Christmas to eat with the family and I’m still working on a second fruit cake from final class which I’ll cover with the frangipanis so I’ll post that up next time I update this blog. I’m thinking the theme will be “winter wonderland”… so stay tuned!

So in the space of about 9 weeks I think it’s fair to say I learned a lot. Scary Lynn also taught me a huge deal about the commercial realities of the cake decorating business.  For instance, wastage of the slightest scrap of material is considered a total sin – or as she put it “throwing money in the bin”. So I’ve learned to be very efficient about weighing my materials and being as precise as possible about estimating quantities. The downside is I also have about 10 tubs of different leftover coloured royal icing in the fridge which I feel too guilty to throw out and am slowly working my way through when I practice my piping!

All in all, I’ve progressed from being the corporate girl who pipes slowly to “absolutely fearless”(I think this was in reference to me always wandering off-syllabus and trying to do my own thing!). So I’m pretty pleased with how I went and I’ve got a great bunch of new skills which I’m already applying.

So look out cake world, Amy’s Cakes is TAFE qualified and venturing on…!!