Learning with Jean Michel Raynaud was probably my most rewarding workshop at the Perth Cake Convention. This was a four hour workshop which can only be described as insanity – insanely good experience and insanely character-building piping work. But more on that soon.

Firstly, a bit on Jean Michel. I would describe JM as a guy who really knows his stuff. You can tell how much pastry experience he has had because his depth of knowledge is evident even when explaining small things like saturation of icing with alcohol. You may have also eaten some of his macarons at Baroque Bistro & Patisserie which is in Sydney’s Rocks area. In fact, at one stage I think JM may have stolen the limelight from Adriano Zumbo’s infamous shops in Rozelle and Balmain because of the quality of his macarons. As a Frenchman now in Sydney, he has also been featured on Food Safari on the SBS in the French episode and was also an instrumental member of the Planet Cake team who built a record setting Opera House cake and re-created Wiliam and Catherine’s 8 tier Royal Wedding cake for Womens Weekly Australia in a mere 48 hours. You can find out more about JM at his facebook page here.

In terms of cake decorating, JM’s worked at Sweet Art and Planet Cake so his background speaks for itself. He favours a cake decorating aesthetic which he calls “organic”. I interpreted this to mean that whilst you still decorate in a very clean and polished way, it tends to look more “organic” when it is done in a less structured manner which could involve freehand piping, more visible brush strokes when applying colour (but in a deliberate manner) and generally a very natural type of finish. I think this style tends to suit more floral cakes or cakes which take their inspiration from nature. Some decorators, particularly those who are more minimalistic and favour more contemporary looks tend to do the exact opposite – solid colours, minimal designs, heavy use of geometric shapes, use of block colour etc which have been carefully traced onto a cake or conceived down to the millimetre.

Now back to the workshop and little old me…..

I wasn’t too sure what to expect from this workshop as we’d been given very sketchy details about what we’d learn (bit of feedback for the CAA team here!). But I signed up mainly because I was very interested in this technique called “lalique piping”. These were our materials for the class: 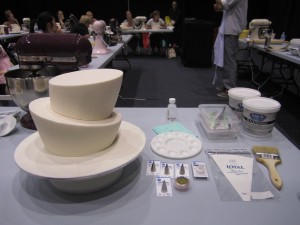 JM began with a demo of how to cover an asymmetrical tier and achieve sharp edges… nothing too new here for most people in the class but it was fun to watch JM at work. JM then showed us how to saturate and wash a pre-prepared madhatter shaped dummy cake with a pink airbrush colour mixed with decorating alcohol. The room smelled like a brewery after about 15min but we had fun practising how to achieve an “organic” look. 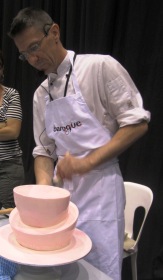 The design we were creating centred on piping the several trios of leaves of a lily flower on an asymmetrical madhatter cake. We weren’t given any guides or markings and were only shown the principles of how to pipe the right shapes. So for those that hadn’t piped much before there was a lot of apprehension and I daresay stress in the room!! JM also imparted the philosophy of creating “balance” on a cake and focused heavily on symmetry throughout the class, frequently giving us feedback on placement of our leaves and flowers so that we could achieve the intended effect.

We first piped the outlines of the flowers before creating extremely runny royal icing and flooding each leaf with water and icing.

Using a brush we then spread the icing around and just before it starts to set piped an extra “vein” down the centre of each leaf so it gave the impression of “melting” into the leaf. Here’s what it looks like when it’s still wet: 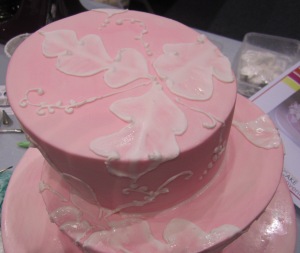 Piping on a bias on the side of a cake is super hard and I found it tough to connect everything evenly especially over the edge of a cake which is completely asymmetrical… the fatigue after 3 hours of piping also gets to you and lots of people in the class were complaining about how painful their hands were. I thankfully brought some chocolate and I also love piping so didn’t feel too bad… my apron was however covered in royal icing by the end of the class because of the number of mistakes I’d have to wipe off with my fingers clean on my apron…

We also got a chance to play with an airbrush at the end of class and sprayed some lustre onto the cake – so much fun!!! I’m already asking Mr Cakespeare if my next birthday present can be an airbrush gun.. teehee.

As the French say… et voila! Me with the master:

I then had to figure how on earth to take this cake home… some students from interstate had brought their own home made boxes. Luckily we all got a box to take home and I managed to get it home in one piece after using nearly a whole roll of sticky tape to secure the cake down.

Lalique piping is a really forgiving style and it gives you the freedom to make some mistakes so you can hide them later! Having said that, I really struggled with getting started. JM probably assisted just about every other student in their class to start their first leaf but me and I was happy that way as I believe the best way to learn is just to have the courage to dive right in and have a go. Even if that did mean I had to scrape mine off a few times before I got going…

Not amazing but given this was my first completely freehand piping attempt (no markers, no templates!) I’ve concluded that I really need to practice large swirls more but I’m really not too displeased with this final product!

Just want to finish up by saying thanks to Sensei JM – I know you weren’t too sure about being blogged about so hopefully I did you justice!