I don’t think words can really adequately describe the fear I faced with this cake. There is nothing quite like the prospect of making a challenging cake you have never made before. Google is usually a bad place to start because you see some perfect creations and think “Mine is never gonna look that good!”. Then I reminded myself to have fun and that I was comparing myself to people who were sculptors or engineers by background and that I was neither of these. It took me a good 24 hours to muster up the courage to carve the body of this cake but I took the plunge late on a Tuesday evening after I’d got myself in the right mood over a couple of episodes of Modern Family. Keep in mind I was also baking 100 macaron shells the same week just in case you think I’m sounding a bit neurotic here..

The brief was a 70th cake for a friend’s father-in-law who is photography enthusiast and the only information I’d been given was that his name was Alan and he had a Nikon camera. So the process started with some good old fashioned googling to find out exactly what a Nikon cake looked like. Investing in my iPad was probably the best thing I’ve ever done – I had it in front of me nearly the whole time I was making this cake.

First step was the body. I did this in 3 layers and built up a small mound of cake on top where the flash would normally slot in. I also realised that using a filleting knife was a fantastic way to do the very fine carving required to get nice rounded edges. The lens was simple – a mini double barrel cake which I cut out using a large circle cutter in 4 layers. Ganaching was very easy except in the very deep parts of the handheld section of the body but because the carve was quite accurate, this didn’t take too long at all.

Here’s the cake in its ganached state before it got hot-knifed: 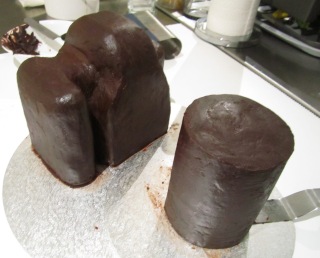 Then came the really really daunting part which I was fearing all along: covering the cake. Because I’d cut such deep recesses into the handheld part, I knew it was going to be tough to cover without tearing the sugarpaste. Worse still, it need to be clean because white cornflour stains on black icing are so hard to get rid of. It took 2 attempts but here is the first stage of covering the cake and the board:

Covering the lens was easy as it was the same process as normal round cake. Getting the textured part of the lens was also really simple – I just cut out a rectangular shape that would adequately wrap around the body of the lens and used a small quilting tool to mark out the borders. I then used the back of a very long knife to make the grid patterns by hand. In the absence of any embossing equipment, this was (I thought) a decent hand-crafted job!

Other details added including buttons, Nikon and the hallmark red V shape on all Nikon cameras:

I loved that this was really starting to come to life now. As you can see the white cornflour marks were not very pretty… so I ended up using my old piping gel trick to get rid of them:

And here’s where the amateur skill level starts to show a little… A bit of humidity again was my worse enemy with lumps and air bubbles forming around the handle. I also wanted to put a photograph of the birthday boy on edible rice paper to transfer onto the screen however the client never quite got there in sending me one!

So here it is in its finished form, I am pretty pleased with how it turned out and sure there were lots of things I would have liked to have fixed and changed but for my first complex novelty shape, I was pretty darn happy with the result! 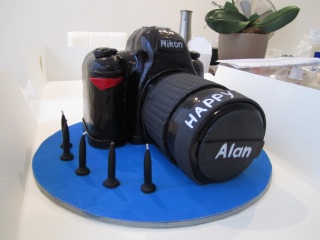